Joycestick Branding
Designer
I was responsible for all project branding on Joycestick. Read an introduction to the project here.
Designing a logo for a VR game is not easy. It's difficult to communicate both the immersive qualities of the medium and the essence of the game itself. Many VR games opt for their logo to incorporate some sort of VR headset imagery. That always struck me as a bad idea for the following reasons:
1. It's ugly. Seriously, it's a brick that you strap to your face. The HTC Vive is not going to be in the design section of the MoMA any time soon.
2. Even if it wasn't ugly, it's still indistinguishable. It could be a pair of ski goggles for all we know. VR headsets are neither easily recognizable nor iconic. They are not logo material.
3. There are more subtle (and prettier) ways to convey that the game is an immersive experience.
With this view in mind, I examined what exactly Joycestick was about. Yes, it's about Ulysses. But you can't separate the book from its creator: indeed, the name itself – "Joycestick" – gives it away. We don't call fans of the book Ulyssians, we call them Joyceans. The two are inexorably linked.
Following this, it makes sense to review visual Joycean staples. 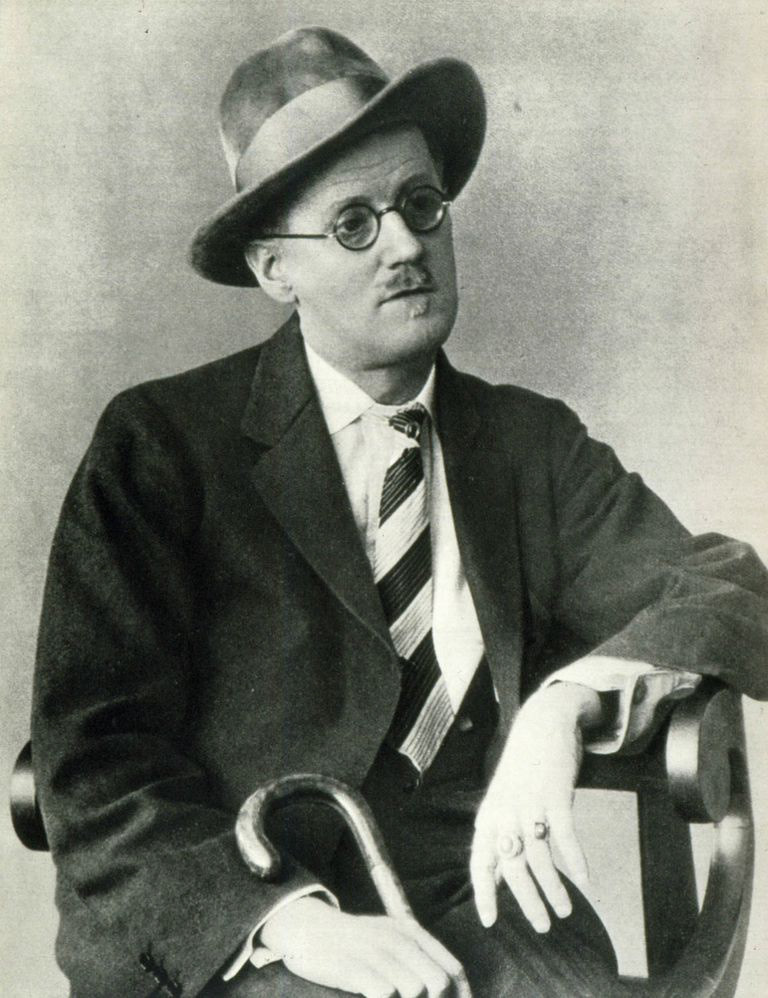 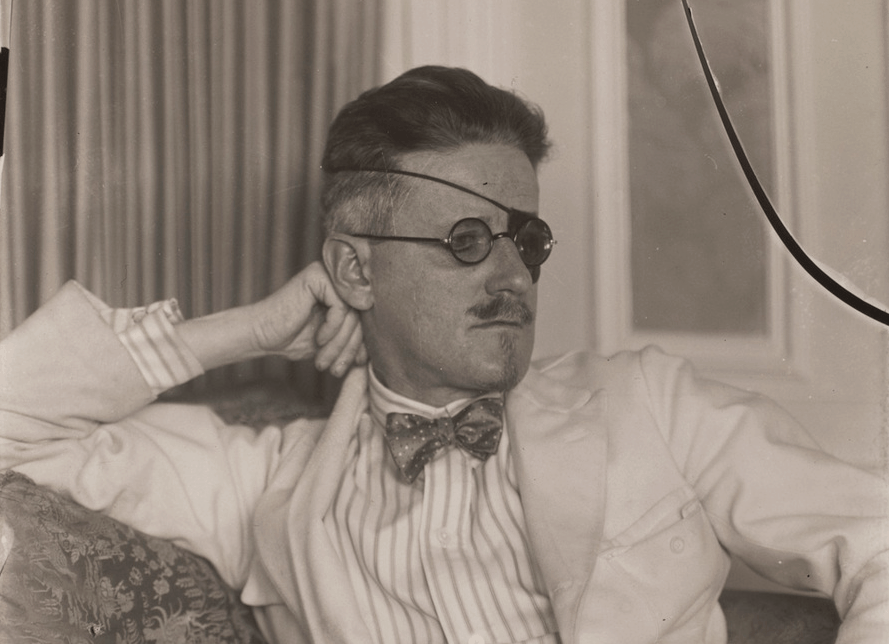 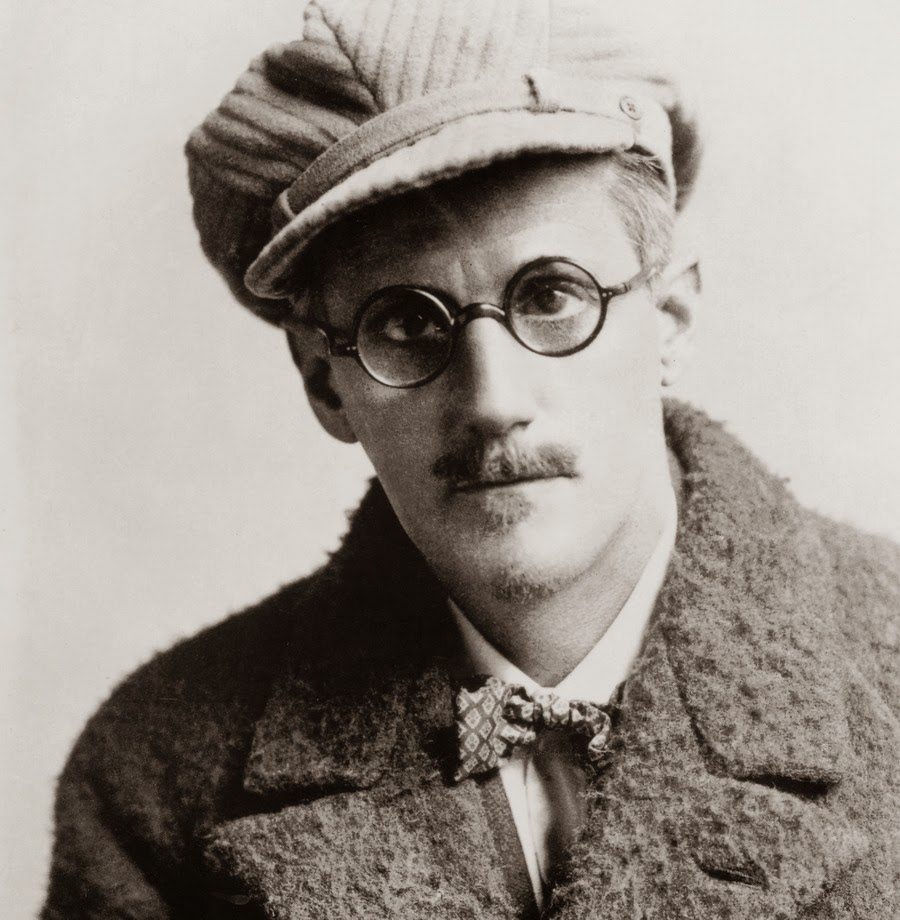 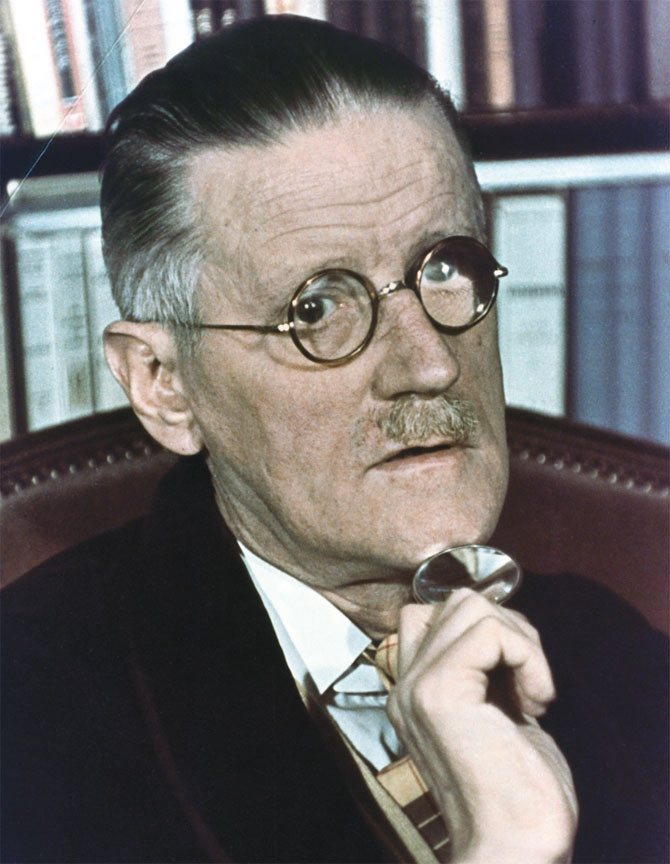 Among common Joycean imagery there is the hat, the glasses, the bowtie and possibly the moustache. It seems to me that of these images, the glasses are the most relevant, and probably the most striking. I have seen portraits of Joyce without his hat, bowtie or 'tache, but I have seen few where the man forgoes those spectacles.
The glasses are also a natural fit for the project. The most important aspect of VR is how it affects your vision. Sure, the audio is very important, but the near-complete visual immersion is what's new about virtual reality. And seeing as this is a visualization of a text, it makes a lot of sense to drive that aspect of the project home. What a more fitting image to convey this sentiment than Joyce's glasses? It implies not only that you're entering a visual experience but also that it is his visual experience; you get to see his world through his own eyes.
Which leaves the matter of taking those glasses into the 21st century: how do you put a modern design spin on old frames? The roundness of Joyce's glasses is essential, so I composed two circles interlinked with a much smaller semicircle, resulting in a balanced, pared-down and harmonious image that is instantaneously recognisable as a pair of glasses. The decision to thicken the glasses beyond what Joyce's would have been was largely practical: it had to stand on its own two feet, whether it was as a tiny footnote on a piece of letter paper or blown up huge on a poster. A heavier weight achieved this balance, and proved to be more graphic and less pictorial than a more period-accurate rendition would be.​​​​​​​
The glasses also needed to be robust enough to use in other contexts: in knock-out, as an outline, incorporated into the background of a poster, etc. You can see examples of the logo's versatility in the posters I made here. 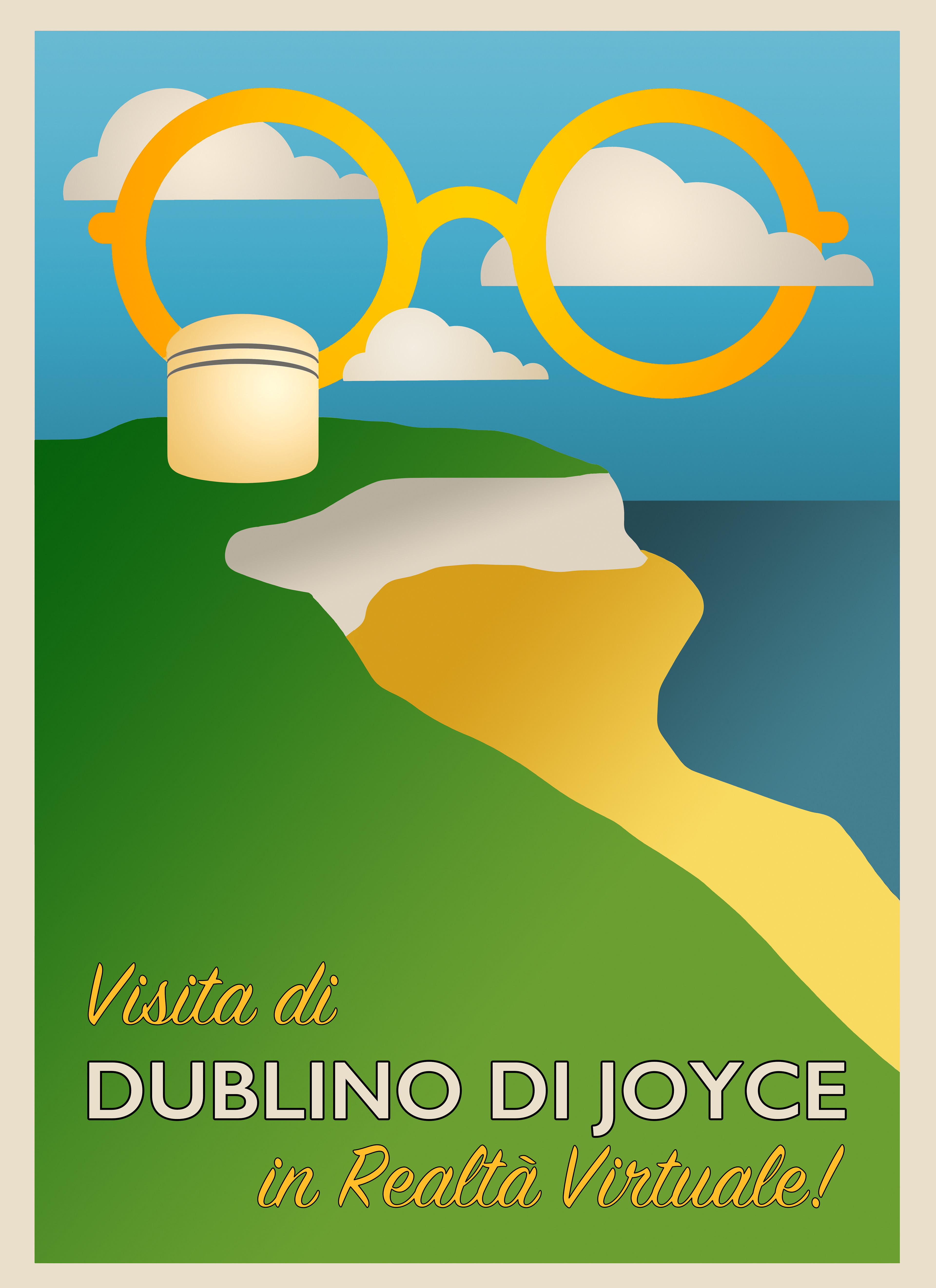 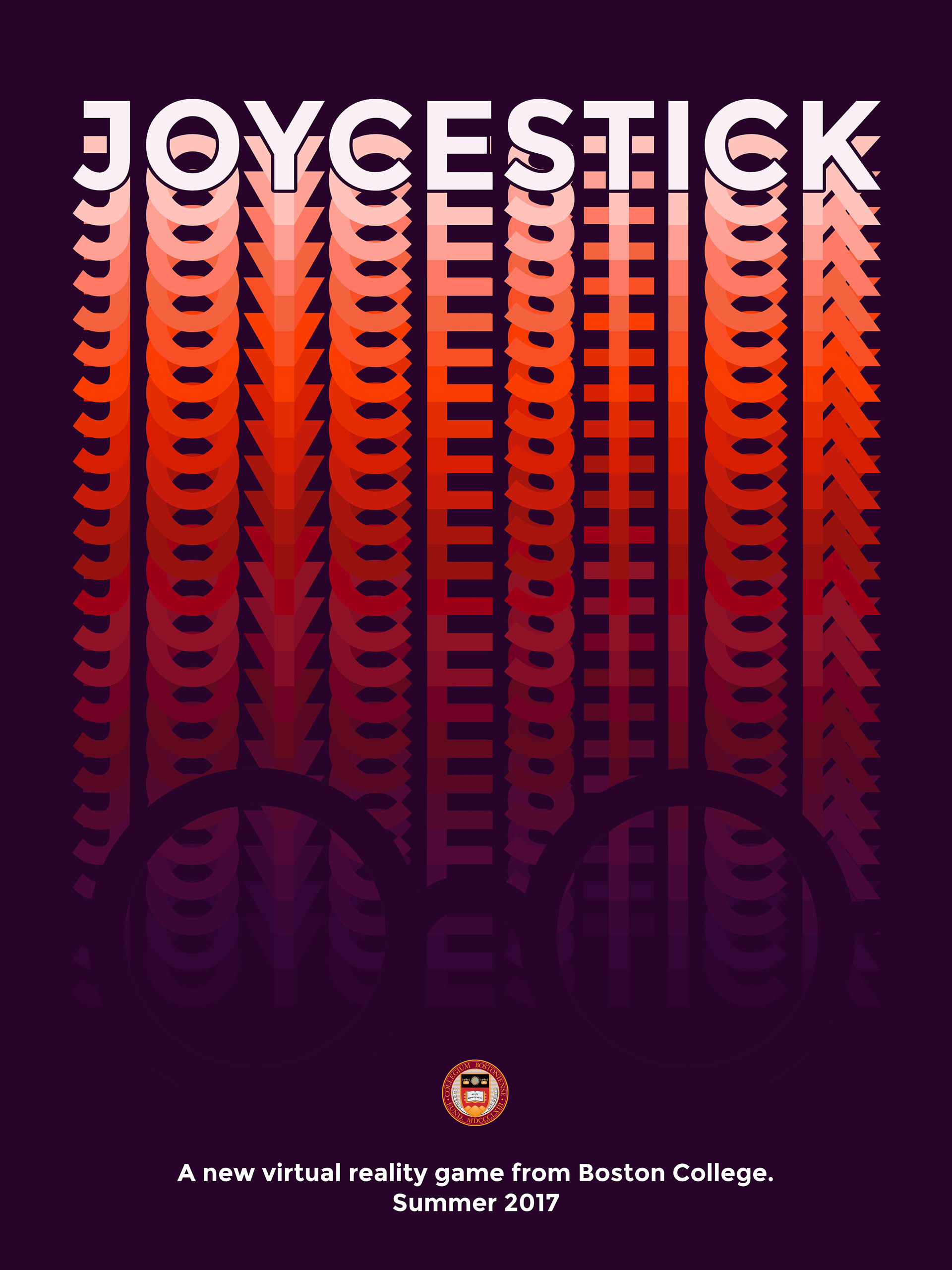 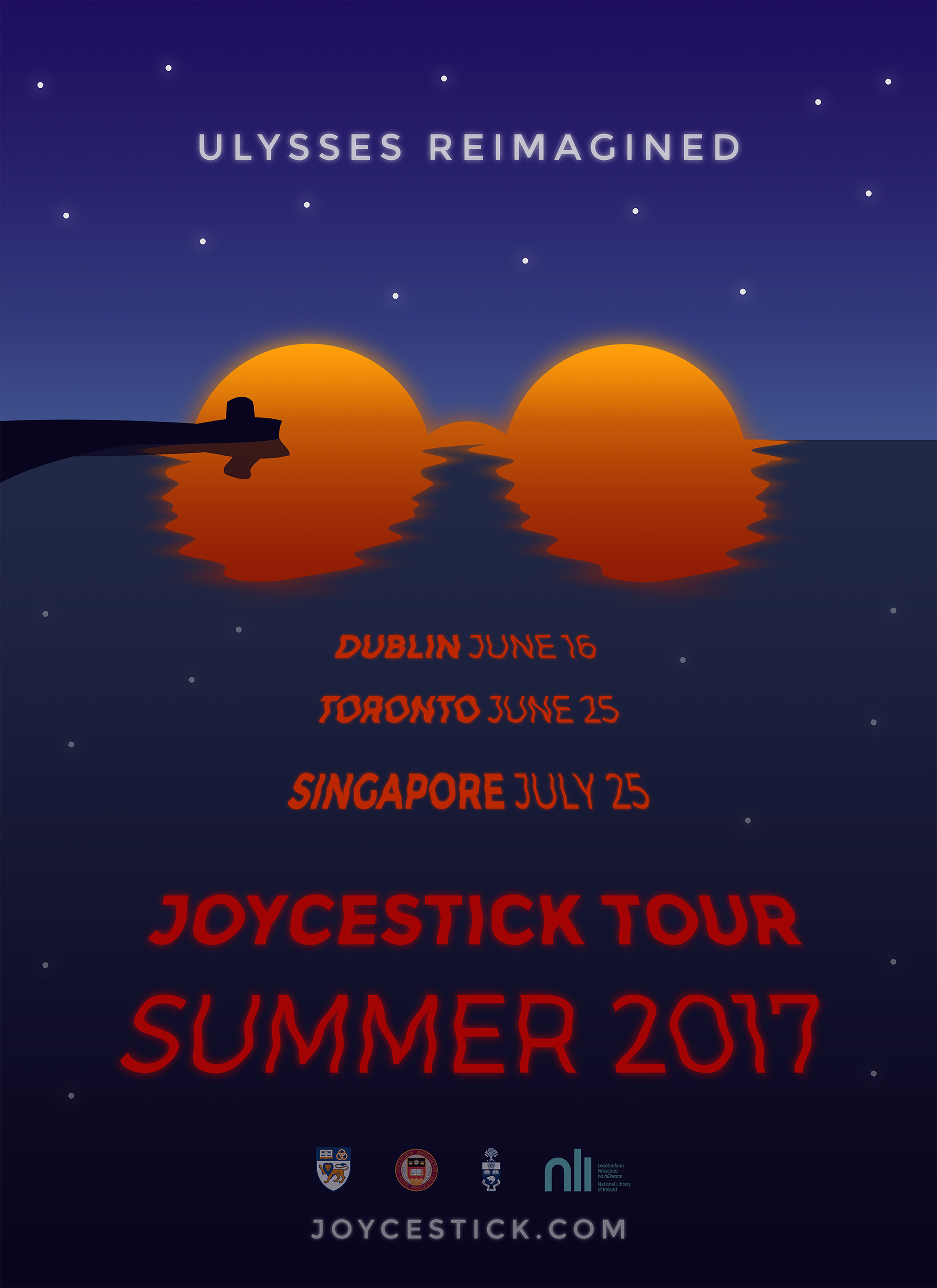 I initially had the branding color scheme as a combination of purples and oranges, which you can see in the center poster above. I wanted to create a sense of "falling into" the artwork, based on color field theory espoused by painters like Mark Rothko and Adolph Gottlieb. Our project manager Joe Nugent (my client) disagreed. As a Joyce scholar, he knew the importance the color blue held over Ulysses. Joyce even used a particular shade of blue for the cover of the first edition of the book, and it stood to reason that blue should dominate Joycestick as well. So we ended up using two shades of blue, one light and one dark, and we weren't afraid to tweak the shades as the project matured.

The top of the first iteration of the website. We ended up subduing the shades as the project matured.

Nothing gets me more jazzed than picking out fonts, and Joycestick was no exception. I figured a project that was an updated take on a modernist work should thus be communicated by a font that is a relatively recent take on classic neo-grotesque typefaces like Univers. I settled with Montserrat, which is somewhere in between being geometric and neo-grotesque. The roundness of the characters nicely complemented the logo's series of circles, and it proved quite handsome as both a display and a body font. Even better, it was free, and it worked as a web font on all platforms.
The end result is a Dieter-Rams-rule-following logo that feels fresh, exciting, and more like a tech startup than an english class. It channels that it's both a visual project and that it's Joyce-related. Both the icon and the font are updates of modernist ideals, which is perfectly suited to the project.